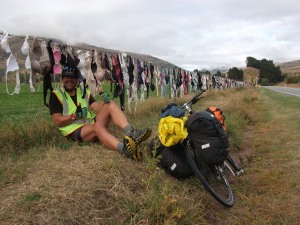 Roadside Bras on way to Cardrona!

Cant beat a flat white by a toasty fire, Cardrona hotel. (which opened in 1853). 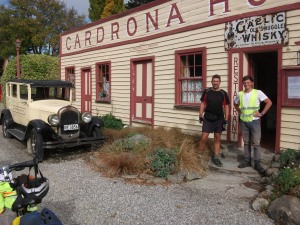 Outside the iconic Cardrona hotel 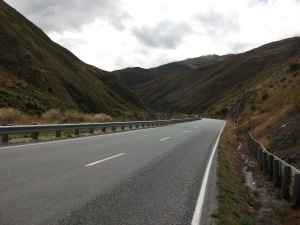 You guessed it…where’s David got to? 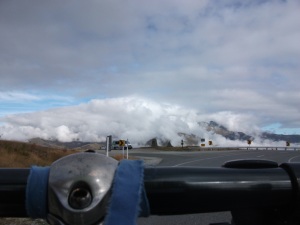 Rex’s first view of top of Crown saddle?…probably not!

How come I look knackered and David looks as fresh as a daisy!

Gilfredo and David instantly hit it off! maybe it was the Sequoias? 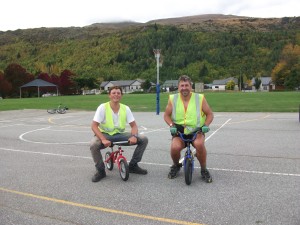 We decided to trade our bikes in for something smaller!

At least David is now keeping up!

Where do you put the panniers? 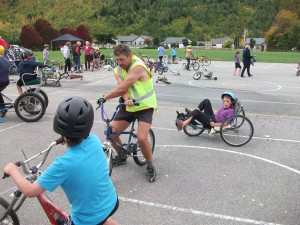 Petanque at Arrowtown Bruce and I thrashed by the ladies (Kay and ??) 13-3! 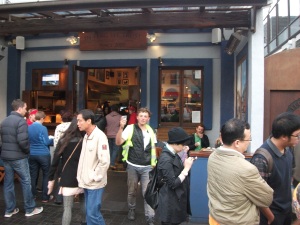 David and I had high expectations from Fergburger in Queenstown. We were not disappointed!

West Virginia may be Almost Heaven. A Fergburger in Queenstown after a great day pretty much is!

Well that was a pretty near perfect day! We met loads of different and interesting people, saw some fantastic sights, ate some mouthwatering food and did some cool stuff both on and off the bike (including on and off lots of bikes.)

David came over from the hostel hed stayed at early enough for us to get away at 9am (it’s much lighter in morning as clocks went back last night).

The road up to Cardrona was an almost imperceptible climb and the scenery was full of the golden signs of autumn, the trees were turning colour, some full of fruit and berries (apples, Hawthorn, rosehip, elderberry). We stopped for what appeared to be damsons and they were really juicy and sweet.

We passed a group of asians with powerful cameras on tripods in a field and asked them what they were doing. They said they were taking pictures of reflections in the puddles in the field! This just seemed crazy when they were just so many photographic images all around this area. They stopped when we talked to them and started taking photos of us so we gladly posed for them (nice to be considered as worthy of a photo as a puddle!)

We then stumbled across (and into) a fence line full of bras of all different sizes and colours, how brazare! Not sure why they were there so could only admire them and speculate on the previous owners.

I needed my own C cup (of strong coffee) after encountering all these Mammary Mounters so we headed for the emblematic Cardrona hotel ( its been used to promote ads for Speights … Beer of the South) . David and I are pretty similar in that we just seem to strike up conversations, if we don’t get asked about the cycling David tends to ask people easy questions like how far to next town, is it hilly etc. I tend to make a comment or offer to help e.g do you want me to take a picture with you both in. We each chatted to customers and staff and must have been there for about an hour. Found the pub is 153 years old and longest serving publican ran it for 40 years from 1920s when the gold ended to the 1960s. We’ve been invited to stay with a lovely couple from Tasmania. There is a 1000km cycle route over there and I talked to Peter and David talked to Denise who were holidaying together. They were a fantastically easy going couple and Peter told me about the poor Tasmanian devil which is suffering from a facial tumour which hindwrs them eating, the tumour is brought on through a gene common through most of the animals and now scientists were trying to isolate and breed more resistant devils to improve the genetic makeup and reduce the occurrence. Until this is undertaken Numbers are down to 10% of what they were. I met a few blokes from Whangarei and they spoke fondly of the old pools where I’d managed. A couple talked to us about cycling and what we carried, how long and how far etc. With lovely wood fires and friendly cats This was getting a bit too cosy and we had a lot of climbing to do!

And so it turned out, the gap between David and I lengthened as the road got steeper and it was one of those “it must be round the corner” type rides where the summit never arrives in time for when you want it. I got off and walked twice but was determined to cycle the last bit to the pass. Rewarded with awesome views down to Queenstown and soaked it all in. Had chat with an English couple who were visiting NZ for first time. The chap was covered in Sandfly bites and had been to Milford Sound but on a cloudy day. Warned them of the West Coast sandflies but that it was beautiful coastline. David showed up and we braced ourselves for the steep descents. Boy it was steep on the other side and we needed to apply brakes almost constantly. We then met Gilfredo, a 61 year old Italian with every exaggerated trait you know that Italians possess. He was 61 and we were his lifelong friends immediately, he had a hand built bike and was carrying absolute minimum as he toured the whole of NZ. he works at restoring old buildings which gives him 3 month a year to cycle and he’d done everywhere. He looked pretty fit and we imagined him effortlessly getting up the steep side of the Crown range. He was heading for Matarora that day which wed taken 2 day to come from! He said he was blessed to meet David from California as he had just been thinking about his next trip there and wanted to see the sequoias and Yesemite and Yellowstone parks. He’d loved trip he’d previolusly done down from Alaska and thought Vancouver the best city in the world.

We said our arriverderci’s and zig zagged our way down to Arrowtown which looked stunning in the autumn colours. I spotted a load of bikes at the local school and headed over. This was my highlight of the day. A couple of older guy run an “bike 4 fun” programme visiting towns across the south. They have scores of cool bikes of all shapes and sizes, and David and I were like the heaps of kids there trying every one. Some of the kids were with “big buddies” which is another programme aimed at providing adult support to children who may have lost a parent or having trouble at home etc. Chatted to the organisers inbetween the fun and was really impressed by what they were doing I gave a donation.

We had a look around Arrowtown including the chinese Settlement (there were loads of chinese visitors there and the place seemed much more geared up for Chinese visitors since our last visit with signs and shops). David wanted to ring his Mom so I watched a few locals playing petanque and was invited to join in. It was a “men v. Ladies” game and Bruce and i got trounched 13-3. Great fun though and I now have more friends in Arrowtown.

Had to make a move to get to Queenstown before got too late so bombed the last section past Lake Hayes and into Frankton where we picked up the off road trail around the lake, this was beautiful ride and took us right into the heart of the tourist mecca that is Queenstown. Our first priority was to find Fergburger restaurant as we had been hearing high praise being bestowned, beyond that of burger fuel if that is possible. It did indeed prove so and i had the most delicious pulled pork burger imaginable. We sat and ate it at the wharf and listened to a good singer at a nearby bar and it was a lovely moment.

Have set myself up at the lakeview holiday park while David has opted for backpackers due to his leaky tent and not sure if will rain. Forecast looking cloudy but improving. I’m aiming to get over the lake to Walter Peak station tomorrow and we’ll see if this is together or David and I may meet up again later.

Also heard from Karla. She finally made it to Island Bay and has finished her North Island TA journey, going the toughest of routes, congratulations Karla.